The author, Darius Ceburnis (NUI Galway, at left), and Meilu He (Clarkson) discuss results in real-time.

Organic matter enrichment in sea spray particles was discovered few decades ago, but general wisdom did not recognise it largely due to poor instrumentation to study it. Oceans occupy nearly 70% of the Earth’s surface giving marine atmosphere its special status. Anything happening at ocean-atmosphere boundary has enormous global implications due to its sheer volume. Earth’s climate is dependant on marine atmosphere as is human welfare on marine life.

For a long time marine atmosphere particles were believed to consist only of sea salt and sulphate, both inorganic compounds easy to detect and quantify. Organic compounds in the atmosphere are as variable as the life on Earth making them particularly difficult to study. In a similar way that many bacteria, plant and animal species still remain unknown to science, organic matter in the air is no different. 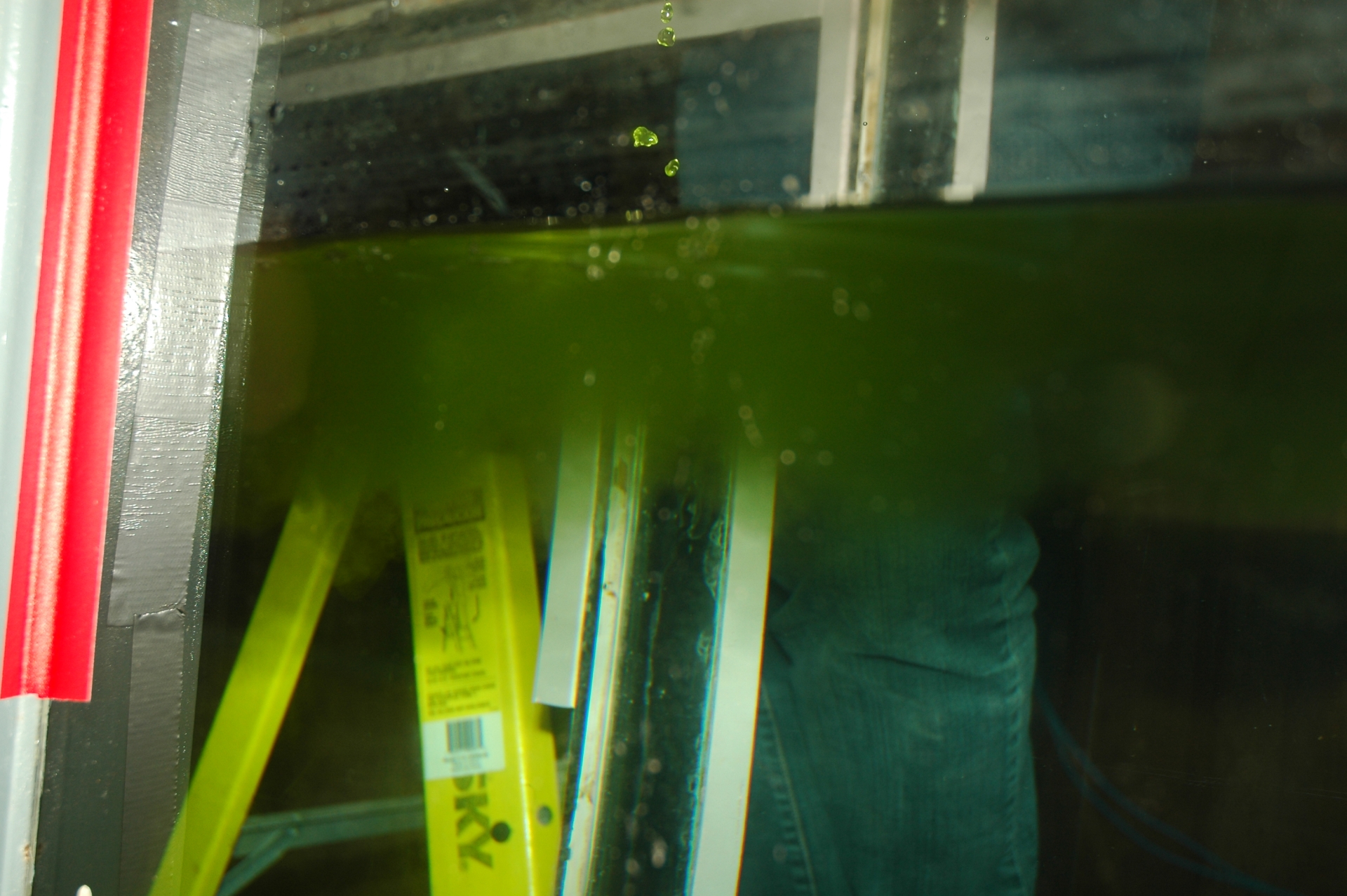 A monoculture of Duneliella tertiolecta (green algae) is added to the wave tank on Nov 5th to imitate oceanic bloom conditions. This photo was taken before the algae was given time to mix in the tank, and so is highly concentrated.

Significant progress has been made in the last decade identifying organic compounds in the marine atmosphere mainly due to the progress of sophisticated analytical techniques making it possible to peek into individual particles in real time and to quantify the organic material in them. We know that organic particles are present in the air over the oceans and are seeding the marine clouds; we can sometimes generate organic particles in the laboratory, but so much more in unknown about their specific chemical composition, biological origin and ways they are produced and transformed. Quite clearly we have to bridge many gaps between biology, chemistry and physics of the ocean and the atmosphere to understand a coupled system. 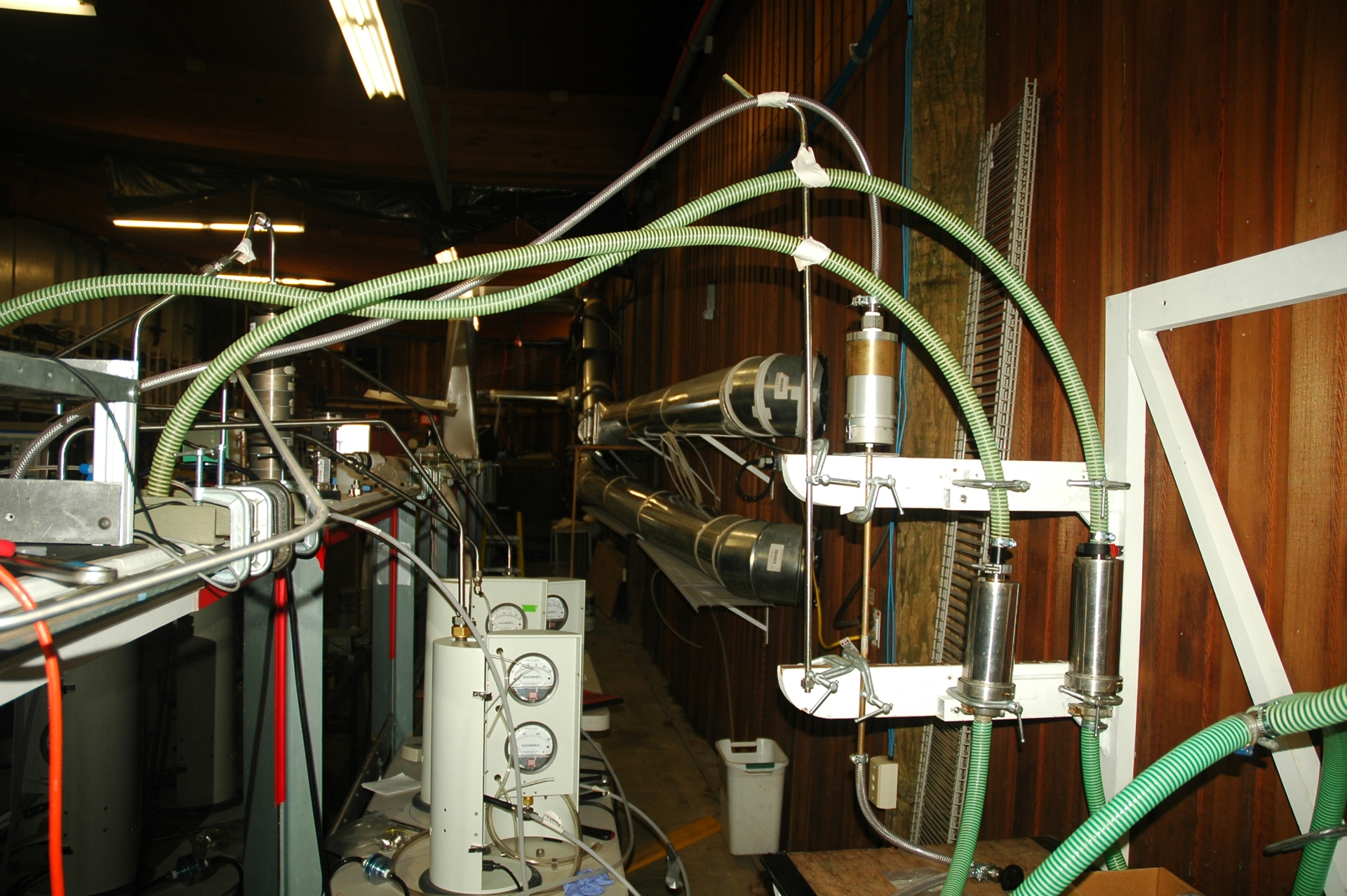 MOUDIs and Berner Impactors are collecting samples for offline analysis using a variety of spectroscopic and microscopic techniques.

A unique CAICE facility is a perfect laboratory to study physical and biological processes together by joining forces of different scientific groups. The two groups I am representing are from Ireland (National University of Ireland Galway) and Italy (Institute of Atmospheric Sciences and Climate of the Italian National Research Council) who joined their forces a decade ago and I had a privilege to be part of. The two setups – an online High Resolution Time-of-Flight Aerosol Mass Spectrometer capable of quantifying particles smaller than 1 micrometer in real time and an off-line system consisting of low pressure impactors designed to quantify inorganic particle compounds, water soluble  and water insoluble organic matter as well as Proton Nuclear Magnetic Resonance method for resolution of organic matter species – will give the best quantitative measurement of organic compounds released by different algae species or present naturally in sea water. I am excited as everyone else here to use a wonderful facility and benefit from scientific discussions.

Today we started our first experiment by adding living algae into the huge wave channel which is the closest thing to the real ocean we can have. An exiting week is ahead to find out what those tiny plants of the ocean will reveal in the lab.