Aerosol particles, microscopic bits of dust, soot, and sea spray suspended in the air, are the most poorly understood component of Earth’s atmosphere.

What is an aerosol?

Our atmosphere is made up primarily of gases—about 78% of the atmosphere is nitrogen (N2) and 21% is oxygen (O2), with the rest of it is made up of other gases. In addition to these gases, our atmosphere also contains very small liquid droplets and solid particles, known as particulate matter (PM). These particles play an important role in human health and climate, but are so small that when you look at the air around you, you usually can’t see them with your bare eyes. In areas that are highly polluted with particulate matter, however, the difference is clear.
For example, look at the two photos of Pittsburgh, Pennsylvania below. On the left, there are a lot of particles in the air, and on the right, there are a lot fewer particles. Can you see the difference?

These very small liquid droplets and solid particles are lightweight, so they can float in the air for a long time without falling to the ground; in other words, they are suspended in the air. When particulate matter is suspended in a gas, it is called an aerosol. When you hear the word “aerosol,” you might think of a can of hairspray or spray paint. When you release the hairspray or spray paint out of its can, it releases a mist of small liquid droplets, called an aerosol spray. However, the particulate matter (PM) in our atmosphere can also be referred to as an aerosol because it is suspended within the gases in the air. Because of this, particulate matter can also be called aerosol particles.  Particulate matter comes in a variety of sizes, but in general, the particles are very, very small. Fine particles (PM2.5) are particles that are less than 2.5 micrometers (μm) in diameter, while coarse particles (PM10) are particles between 2.5 and 10 micrometers in diameter. How big is a micrometer? Check out Figure 2 to get an idea of how small these particles are. Can you calculate how many coarse particles would fit across the diameter of human hair? How many fine particles would fit? As a challenge, try doing a calculation in two dimensions—how many coarse particles would cover the surface of a penny?

Aerosol particles come from a variety of sources—some are naturally occurring, while others are caused by human activities. Some of the sources of aerosol particles are illustrated in the figure below.

One of the natural sources of particulate matter is mineral dust in the desert. When air is heated, it becomes less dense, which causes the air to rise up into the atmosphere. This process is known as convection and generates wind. The wind can carry particulate matter from the surface high up into the atmosphere where it can be transported across large distances, even between continents! In fact, scientists have shown that dust from the Taklimakan desert in China can travel across the whole world in only 13 days! 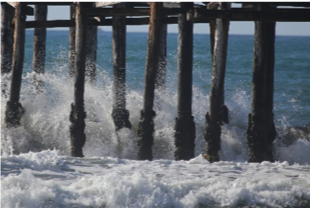 Another natural source of particulate matter is sea spray from the ocean. Think about walking along the beach—does the crisp ocean breeze feel different from the wind when you are further inland? When you are near the ocean, you are probably feeling the sea spray—small droplets of water and other particles that are suspended in the air. The ocean water contains salt and other organic compounds that are released by the algae, bacteria, and other life forms that live in the ocean. When waves break, droplets of sea water containing these salts and organic matter are entrained in the atmosphere. The water in these small droplets can evaporate, which leaves a solid particle made up of the sea salt and organic compounds. Because about 2/3 of the earth’s surface is covered by the oceans, these sea spray aerosols are a significant source of aerosols in our environment. Human sources of aerosol particles include smoke from fires, vehicle exhaust, and factories. When hydrocarbon fuels (such as the gasoline in our cars) are burned, what happens? On a cold day, you may see smoke coming out of the exhaust pipe in your car, and maybe even some drops of water. When fuel is burned, it undergoes combustion. Combustion is a chemical reaction where the fuel reacts with oxygen (O2) in the air to break down into smaller compounds—the main products are carbon dioxide (CO2) and water (H2O). However, these fuels can also react through incomplete combustion, which forms carbon monoxide (CO) instead of carbon dioxide. When incomplete combustion occurs, particle byproducts called soot are often formed—soot contains the leftover carbon that wasn’t converted to gaseous carbon monoxide. In addition to these natural and human sources of aerosol particles, there are also secondary sources of aerosol particles that come from chemical reactions in our atmosphere. Gases, such as ozone, can react with organic gases in the air to form solid products—which form aerosol particles!Based on these sources of aerosols, can you think of some potential sources of aerosol particles in your community? Which areas in your community might have high levels of particulate matter?  These aerosol particles are important to our community as well as our planet, as they can influence human health and the earth’s climate. 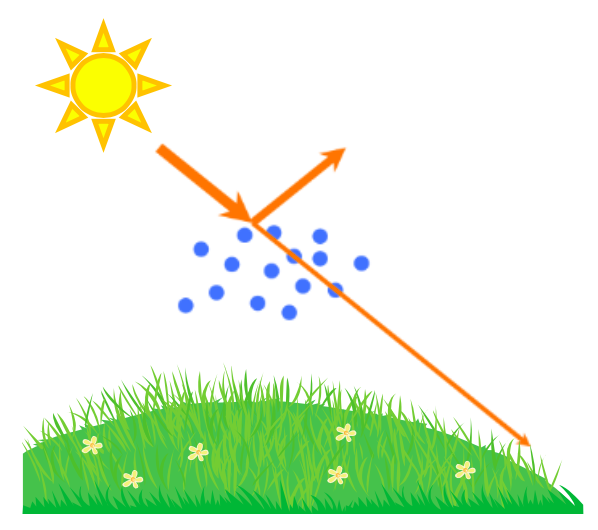 The direct aerosol effect is based on the ability of the particulate matter to absorb sunlight or scatter it back into space (Figure 5). How does this work? The light radiation from the sun travels to the earth, where it provides the planet with a source of heat that drives our planet’s climate. However, not all of the light radiation from the sun reaches the earth’s surface. This is because aerosol particles (and the clouds that they help form) scatter about 25% of the sun’s radiation back into space. Because less of the sun’s radiation reaches the ground, this results in a cooling effect.

Figure 6. Light Scattering. (A) Light scattering causes an incoming light wave (yellow arrow) to be scattered in all directions (green arrows)  through its interaction with a particle (blue circle) (B) Light scattering is based on the fact that light is an electromagnetic wave. The electromagnetic wave exerts a force on a charged particle, such as an electron, or a polar molecule. When this charged particle moves as a result of the force, a new light wave is emitted. This is the scattered light. (C) Particles of different sizes cause the light to be scattered in different directions.

What does light scattering mean? When light energy hits matter, such as a particle, it induces a process where the particle becomes a new source of light. This new light can travel in any direction (Figure 6A), which is why we say that the light is “scattered.” Why does this light scattering occur? This is a complicated concept, but here is a general explanation. To understand light scattering, we have to understand that light is an electromagnetic wave (Figure 6B). This means that it is a wave that is made up of electric and magnetic fields. Electric and magnetic fields can exert forces on charged species, such as protons, electrons, and molecular dipoles. For example, these fields can exert a force on a molecule that has a dipole moment—meaning an uneven distribution of charge. The electromagnetic forces cause the charged species to move. When a charged species moves, it causes the generation of a new electric and magnetic field—in the form of an electromagnetic wave (light). This new light wave can travel in any direction, and is called scattered light. The directions that the light is scattered depends on the size of the particle (Figure 6C). In very small particles, the scattered light travels in all directions approximately equally (Rayleigh scattering). As the particle size increases, more of the scattered light goes in the same direction as the light was initially going (Mie scattering). Although light can be scattered in any direction, some of the sun’s light is scattered away from the earth’s surface by aerosol particles in our atmosphere, which is what causes the direct aerosol effect.

Figure 7. Formation of Cloud Droplets. The water vapor in the atmosphere needs a particle, called a cloud condensation nucleus, to condense on. When a particle is present, water can condense onto it, forming a cloud droplet.

Because of this, aerosol particles act as cloud condensation nuclei (CCN), which means they provide a “starting point” for clouds to form. The properties and amount of CCN affect cloud formation in two major ways:

Aerosol particles can contribute to a variety of human health problems. Particulate matter affects the health of more people than any other pollutant worldwide. According to estimates from the World Health Organization (WHO), particle pollution contributes to approximately 7 million premature deaths each year, making it one of the leading cause of worldwide mortality.

The health effects of the particles are directly related to their size. Particles greater than 100 μm are generally too large to be inhaled. Particles between 10-100 μm can be inhaled, but are usually stopped by our body’s “filters”—the mucus membranes in our respiratory system.  The term inhalable particles typically refers to particles less than 10 μm in size that can make it past the body’s defenses and deep into the lungs. These particles pose the most health risk. Inhalable coarse particles are particles between 2.5 and 10 μm in diameter (PM10) and are typically found near highways and factories. As Figure 8 shows, these particles are usually deposited in the nose, pharynx, and larynx. Fine particles have a diameter less than 2.5 μm (PM2.5) and are typically found in smoke and smog. These particles make it deeper into the lungs; a significant proportion of these fine particles are deposited in the trachea, bronchioles, and alveoli.
Scientific studies have linked particle pollution to a number of health problems such as:

Because of the negative health impacts of aerosol particles, the United States Environmental Protection Agency has set National Ambient Air Quality Standards to limit the levels of air pollutants, such as fine and coarse particles, in ambient air. The EPA uses a number between 0-500 known as the Air Quality Index, or AQI, to report the daily air quality. Each AQI number is associated with a certain level of health risk. The AQI is based on the five major air pollutants regulated by the Clean Air Act: ozone (O3), particle pollution (PM2.5and PM10), carbon monoxide (CO), sulfur dioxide (SO2) and nitrogen dioxide (NO2). For each of these pollutants, the concentration of the pollutant in the air is converted to a number on the AQI index.For example, Table 1 shows the concentration ranges of PM2.5 and PM10 and their corresponding AQI index numbers. Each day, the AQI is
calculated for each pollutant, and the pollutant with the highest AQI is reported. In the US, particulate matter and ground-level ozone present the highest health risk, and so usually the AQI for those pollutants are compared. For example, on December 13, 2016 in Des Moines, IA, the AQI for PM2.5 was 51. The AQI was down-graded from “good” to “moderate” and the following heath warning was issued: “Unusually sensitive people should consider reducing prolonged or heavy exertion.” Current air quality conditions throughout the US can be searched on www.airnow.gov.  What is the air quality in your location today?