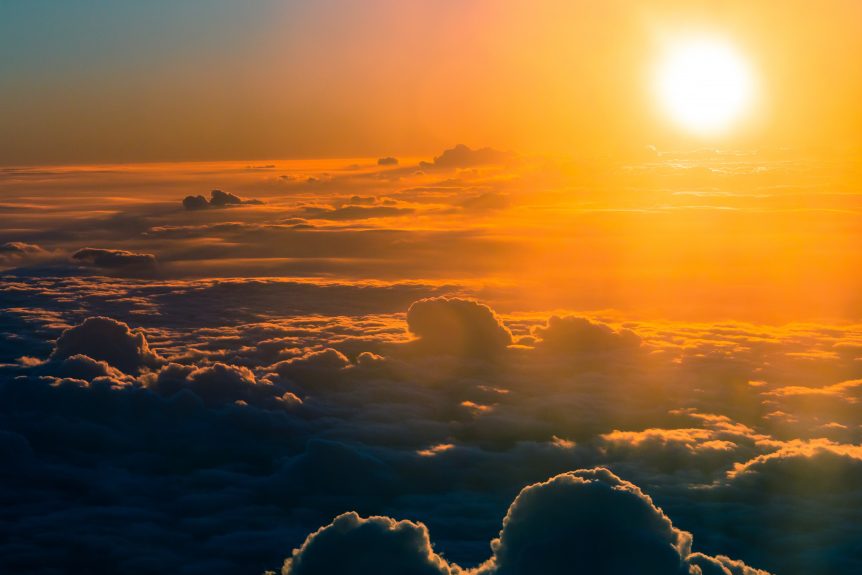 Blazing bright millions of miles away, the sun burns with remarkable power to create a constant source of energy for the environment. This immense reservoir of energy results in photochemistry, or chemistry associated with light, driving a large portion of atmospheric chemistry processes. The incredible phenomena that is photochemistry in the environment is under the scope of research at the NSF Center for Aerosol Impacts on Chemistry of the Environment (CAICE).

I got the experience to sit down with CAICE graduate student Mike Alves to learn more about photochemistry and why a center studying aerosols is focusing on photochemistry.

Alves suggested that CAICE is giving insight to photochemical processes involving aerosols and the ocean. The sun provides so much energy, so it is known that it will cause a change in the environment. With more photochemistry background we may be able to understand that change better.

“It’s certainly going to be one of the dominant mechanisms of organic chemical transformation in the marine boundary layer, and I would argue it’s one of the least understood.”

CAICE seeks to contribute to climate modeling by studying aerosols, tiny solid or liquid particles in the atmosphere. Particularly, CAICE studies the chemistry involved with sea spray aerosols (SSA), which are aerosols that come from the ocean when waves crash.

Observing how gasses and molecules affect the climate through processes like cloud formation is an important role in atmospheric modeling. Photochemistry is a major contributor to these systems. CAICE Researchers contribute their knowledge to further studies and climate models.

“In terms of the really large scale climate models, that’s something that CAICE doesn’t have a direct hand in. We just provide the vertical step of advancement in the field of photochemistry and aging in the marine boundary layer.”

In 2018, CAICE discovered that nascent, or newly produced, SSA isn’t enough of a contributor to cloud formation to explain observations in the atmosphere, Alves said. The major contributors are either aged SSA or secondary organic aerosols, produced from oxidation of gas phase molecules and condensation.

Aged SSA has gone through any sort of transformation from its first production. This transformation could occur as thermal aging, natural decay, oxidation, or photochemical aging. Photochemical reactions of aerosols or precursor gasses are a major factor in aerosol aging, and studying these reactions can strongly contribute to climate models.

“[The] aerosol component of anthropogenic climate change is currently one of the least understood in terms of our ability to measure change.”

Alves explained that photochemistry can occur in a direct manner. This is the familiar process of a molecule coming in contact with light, absorbing a photon, then reacting in some way or emitting the photon.

CAICE’s contributions in the area of photochemistry include the observation of indirect photochemistry. An example of this is the photosensitization of nonanoic acid. Nonanoic acid is a fatty acid, which is a species of organic molecules that are abundant in the ocean but aren’t usually expected to be photoreactive.

Indirect photochemistry occurs when a molecule absorbs a photon and transfers this photon to a molecule that would normally NOT be reactive in photochemical processes, like nonanoic acid. This indirect process is made possible by a chemical species called a photosensitizer, which transfers the energy from a photon to any other sort of molecule.

The indirect pathway of photochemical reactions has been understood for many years, but CAICE has recently highlighted its importance in the marine environment.

To study these chromophores, CAICE is using a “two prong approach” to observe photochemical pathways at the sea surface microlayer, Alves said, utilizing both a top down and a bottom up approach.

In the top down approach, researchers are utilizing marine dissolved chromophoric organic matter (m-CDOM) which is a complex mixture of chromophore containing organic compounds that have been extracted from the ocean.

CAICE studies m-CDOM through spectroscopic methods in the lab to try to characterize the chromophore. Additionally, experiments use m-CDOM as a real life photosensitizer in a variety of systems to observe its effects on the chemistry involved.

The bottom up approach uses model systems to mimic the reactive capabilities of photosensitizers in nature.

However, creating model systems for photochemical pathways poses a challenge to researchers because the identity of photosensitizers is unknown. To get around this, researchers rely on the fact that the functionality of the chromophore is known. So, model systems utilize various functional groups that are expected to behave in a similar manner to the photosensitizer.

As opposed to the top down approach, these model systems are simplified, consisting of only one or two components which are then tracked before and after photochemical reactions.

A recent publication in PNAS by Alves’ colleague, Dr. Karimova, used theoretical modelling to create a large chromophore. Upon comparing this model system to empirical data, she found that the model did a good job of mimicking some chromophore behavior.

Alves started his academic career at Augsburg college in an undergraduate role with Dr. David Hanson studying breathing. This led him to encounter atmospheric chemistry and aerosols, and that’s what led him to join the Dr. Vicki Grassian group at University of California San Diego and CAICE.

Aerosol chemistry is a major driver of atmospheric processes which can impact the environment and the climate. Due to the magnitude of energy coming from the sun, CAICE researchers understanding photochemical processes involved will seek to provide useful contributions to climate modeling.