Understanding aerosol chemistry-climate interactions is an extraordinary challenge, that can only be effectively addressed by highly collaborative investigations. CAICE research is organized into three broad themes: aerosol-production & composition, aerosol chemical reactions, and aerosol-climate interactions. Under each umbrella, CAICE projects unite the expertise of experimental and computational chemists, marine biologists, oceanographers, and computer scientists.

Sea spray aerosols (SSA) are generated from from bubbles bursting at the ocean’s surface. CAICE researchers work to determine the composition, morphology, and internal chemical organization of these sea spray aerosol particles.  As illustrated in many CAICE publications these properties of SSA exhibit incredible variability as a function of particle size and the underlying chemistry and biochemistry of the seawater. To build upon this research, CAICE is actively investigating how SSA morphology and physicochemical properties are influenced by underlying fundamental physical, chemical, and biological processes of the bubble bursting mechanism, the air-sea interface, and the bulk seawater.  The success of this work depends upon integrating “top-down” studies of complex and realistic aerosol particles with “bottom-up” research, testing fundamental chemical principles by using simple model systems. 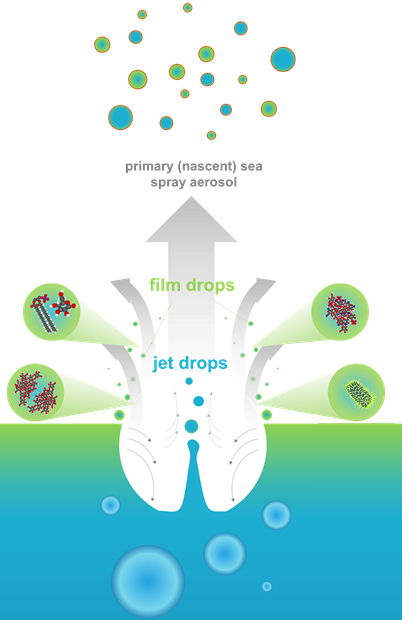 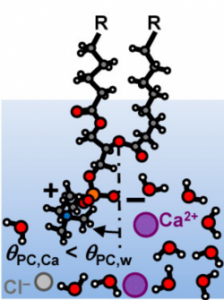 CAICE research of complex and environmentally relevant systems has shown that chemical species are selectively transferred into the aerosol phase. In particular, fatty acids and divalent cations show high enrichment in sea spray aerosols. CAICE researchers are focused on better understanding the fundamental chemical structures and properties driving these observed macroscopic trends. This project integrates experimental spectroscopic studies of organic species and ions at interfaces and within nanoscopic clusters with an array of theoretical approaches.  The highly controlled experiments yield benchmarks for the theoretical simulations and calculations. Also theory aids in the interpretation of the experiments and provides a way to extrapolate microscopic results to macroscopic behavior.

This integrated approach has produced a number of exciting conclusions. Recently, CAICE experimentalists discovered sodium promoted fatty acids to the surface of water, an unexpected outcome. Molecular dynamics simulations from a resulting CAICE collaboration, showed that this macroscopic behavior is the result of contact ion pairing between the sodium ion and fatty acid head group. Better understanding the physical chemistry that drives the behavior of organic species and ions at the water-air interface not only improves our understanding of sea spray aerosol chemistry, but also has implications for an array of fields such as biophysics, biochemistry, and materials chemistry. 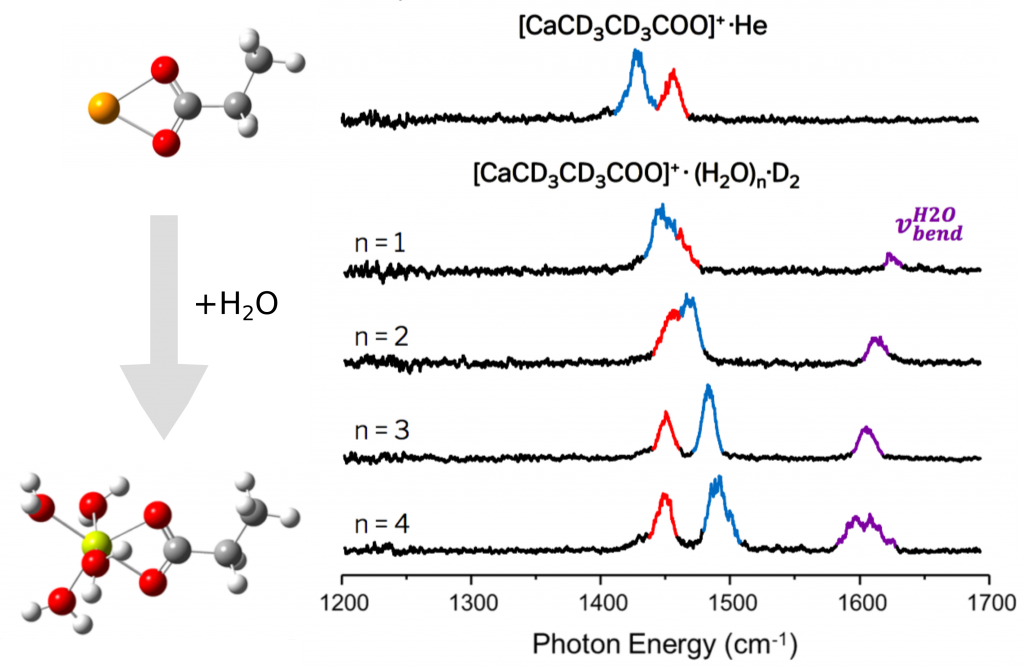 Patterson et al. (2016) developed a unique approach to preserve and image hydrated sea spray aerosol (SSA) particles By flash freezing particles soon after collection and utilizing cryogenic transmission electron microscopy, Patterson et al. (2016) were able to examine the native physical structure and chemical organization of hydrated droplets which are usually modified by the high vacuum requirements of electron microscopy. Even fragile biological structures contained in SSA such as bacteria (a), diatoms (b), viruses (c), and vesicles (d) were detected. 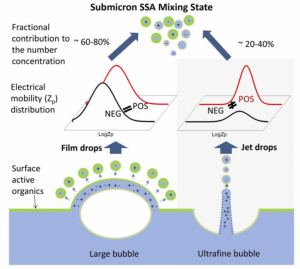 As particle size decreases, enrichment of organic material within sea spray aerosols (SSA), especially of relatively hydrophobic compounds, generally increases. However, even at a specific size SSA particles can still exhibit a range of chemical compositions. CAICE seeks to generate a quantitative understanding of how the bubble bursting production mechanism controls the size-dependent composition of sea spray aerosols.

When a bubble reaches the water’s surface, the bubble film cap bursts and produces film drops.  The collapse of the remaining cavity can then produce jet drops. Typically, it is assumed that submicrometer SSA particles mainly originate from film drops. However, paradigm shifting CAICE findings published in PNAS indicate a substantial fraction of submicrometer SSA particles are also produced from jet drops! These two production pathways result in two chemically distinct submicrometer SSA populations with significantly different ice nucleating activities. Ongoing collaborations are focused on the development of a mathematical model that can be used to quantitatively predict the transport of dissolved organic species, particulate material, and salts into SSA. The ability to predict the size-dependent organic transfer into nascent SSA particles between ~30 nm to > 10 μm will represent a significant advancement in our understanding of SSA composition and morphology. 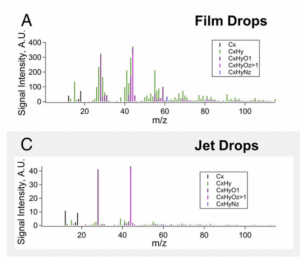 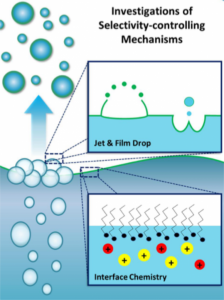 The bubble bursting mechanism, which generates sea spray aerosols (SSA), is an inherently chemically selective process. Surface active compounds are enriched at air-water interfaces, which includes both the surface of the ocean as well as the bubble as it rises through the water column. Because of this selectivity, the chemical composition of SSA particles cannot be easily extrapolated from the composition of seawater. One of the central objectives of CAICE is to develop a greater understanding of the chemical composition of nascent SSA. CAICE studies of complex and environmentally relevant systems have quantitatively shown that some organic molecules, such as lipids and saccharides, and inorganic ions, such as calcium, are enriched in SSA relative to seawater.

Cochran et al. (2016) combined experimental results with fundamental physical chemistry principles to better understand the selective transfer of molecules into SSA. They estimated the concentration of organic species at the liquid-air interface as a function of solution concentration as described by van der Waals adsorption isotherms (left). Utilizing this technique they modeled the surface composition of a specific alkanoic acid solution which closely agreed with real experimental measurements of aerosol particles (right). 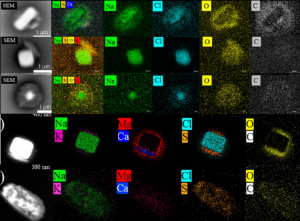 Although traditional studies of aerosol composition have focused on bulk measurements, the average composition cannot be used to accurately predict atmospheric processes when individual particle compositions vary greatly within a population. SSA particle chemical composition varies as a function of size and can range from pure organic to nearly pure salt. In addition, there is a diversity of organic compounds and particulate biological matter, whose transfer is into individual SSA particles depends upon factors such as particle size, production mechanism, and biochemistry of the water. CAICE addresses this real-world complexity by emphasizing innovative measurements of the composition and physical properties of single particles from the nanometer to supermicron size range. Ongoing work in CAICE is focused on designing new techniques to not only study the composition of single particles but to examine the physical structure and chemical organization within individual SSA particles under a range of environmentally relevant conditions.

Morris et al. (2015) invented a new technique to determine the surface tension of individual submicrometer liquid droplets, by measuring the force on special atomic force microscopy probes as they approach and then retract from the droplets (left). This innovative method has allowed direct single particle surface tension measurements of fundamental model systems at a broad range of relative humidities, with Lee et al. (2017) extending the approach on other SSA-relevant systems and showing good agreement to bulk solution surface measurements for relatively low viscosity systems (middle, right). 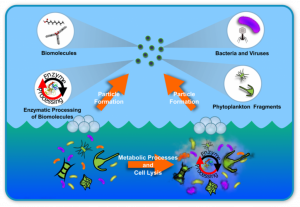 CAICE is focused on developing methods using biological processes to replicate and control the chemical complexity of SSA on both small and large scales. CAICE research has shown that SSA composition is determined by a balance between the rates of phytoplankton production and microbial degradation processes. This important finding contrasts previous paradigms that predicted major changes in SSA composition would occur at the peak of phytoplankton blooms. Ongoing CAICE work is now focused on understanding the physical, chemical, and biological properties that govern the transfer of microorganisms and large biomolecules to SSA. Before CAICE, the transfer of microbes or complex macromolecules to SSA, as a function of biological activity, had never been explored. This endeavor has exciting implications, as the transfer of intact microbes and active enzymes into SSA could transform these particles into tiny atmospheric bioreactors with evolving chemical compositions. 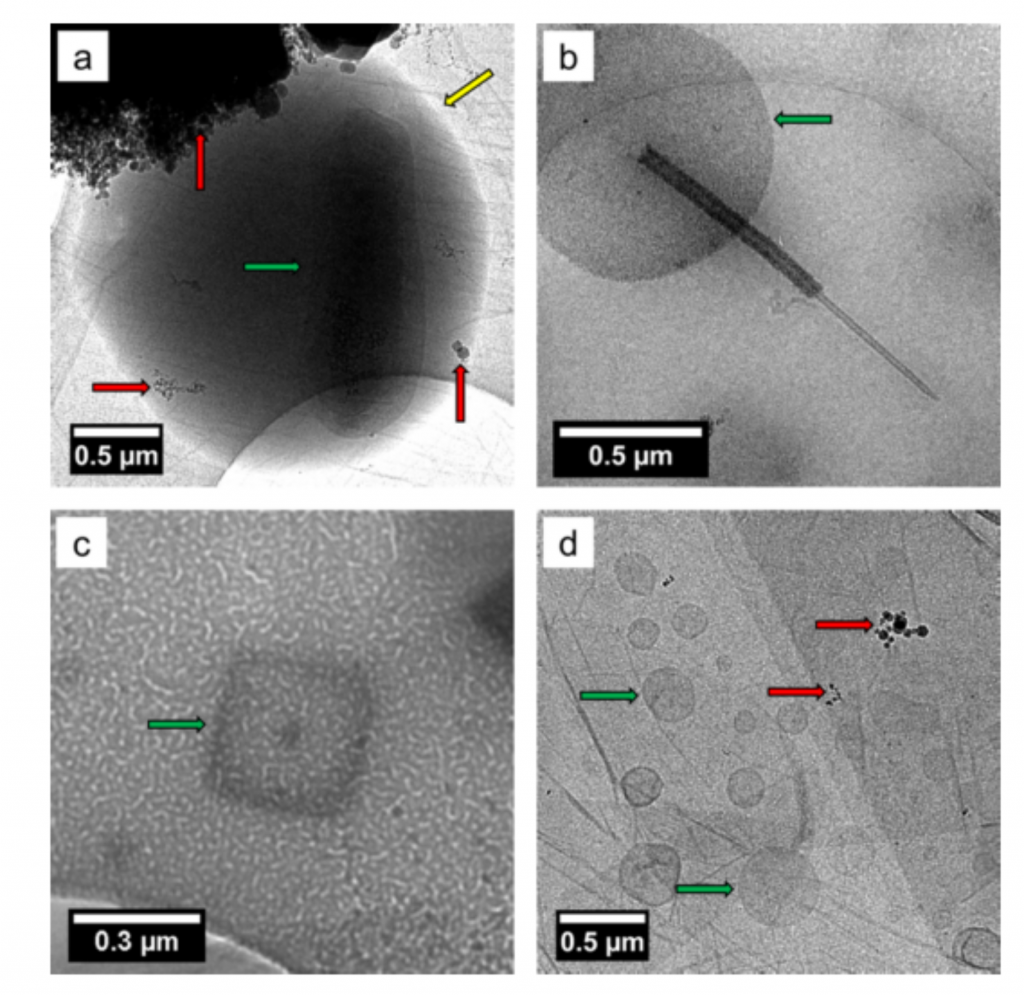 Patterson et al. (2016) developed a unique approach to preserve and image hydrated sea spray aerosol (SSA) particles By flash freezing particles soon after collection and utilizing cryogenic transmission electron microscopy, Patterson et al. (2016) were able to examine the native physical structure and chemical organization of hydrated droplets which are usually modified by the high vacuum requirements of electron microscopy. Even fragile biological structures contained in SSA such as bacteria (a), diatoms (b), viruses (c), and vesicles (d) were detected.

Marine aerosols transform atmospheric gases and are themselves transformed by biological, chemical, and photochemical reactions. In Research Theme 2, we are interested in molecular-level studies to identify the products and unravel the mechanisms of these reaction pathways from first principles. Our overarching goal is to make predictions of chemical processes across a diverse range of solutions involving water, ions, organic molecules, and biological species and study their impact on water uptake, light scattering, and the ice nucleating capabilities of SSA. In parallel, reactions on or within aqueous aerosol particles alter radical and oxidant concentrations in the atmosphere, particularly by accelerating reactions that are inefficient in the gas-phase. 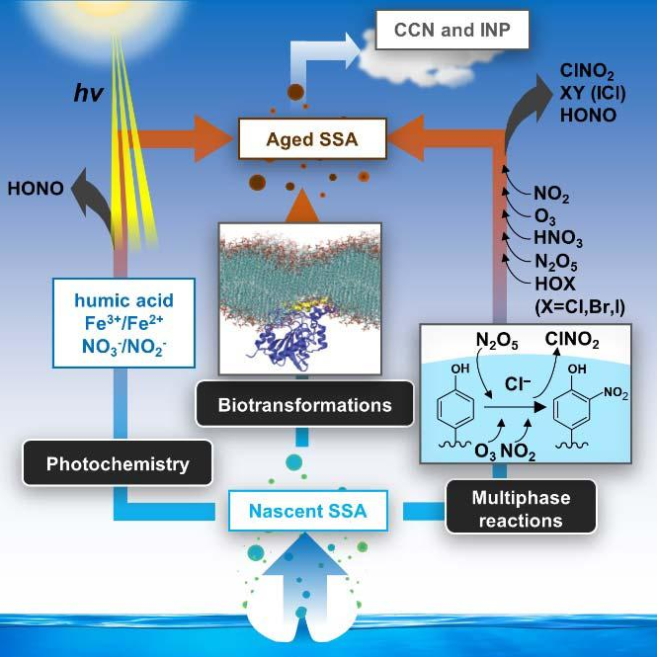 CAICE is investigating the impact that individual particle chemistry has on climate properties – namely the ability to affect radiative transfer and clouds via taking up water, serving as liquid cloud seeds (CCN: cloud condensation nuclei), and the ability to form ice crystals (INPs: ice nucleating particles).

It has been hypothesized that the climate-relevant properties of sea spray aerosol, including water uptake and ice nucleating ability, depend on the chemical composition of each particle and phase state. The coverage and ordering of organic molecules on a particle surface is also hypothesized to be a significant factor in affecting climate properties. The chemical complexity of the atmosphere provides an additional and important dimension to aerosol studies, leading to a variety of molecular transformations in particles. Therefore, a range of surface tensions, water solubilities and ice nucleation activities are anticipated for sea spray aerosol particles in the natural environment. CAICE provides the tools and expertise to effectively produce aerosol complexity, and probe the chemical interactions and pathways through experiments and computational simulations. 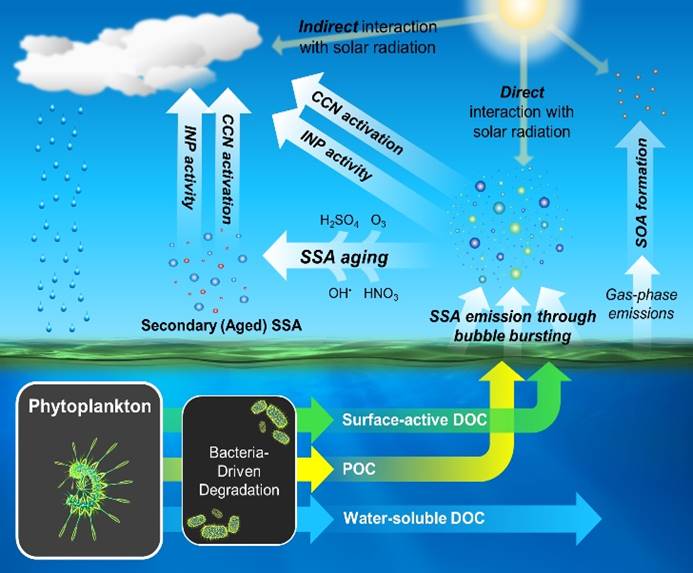