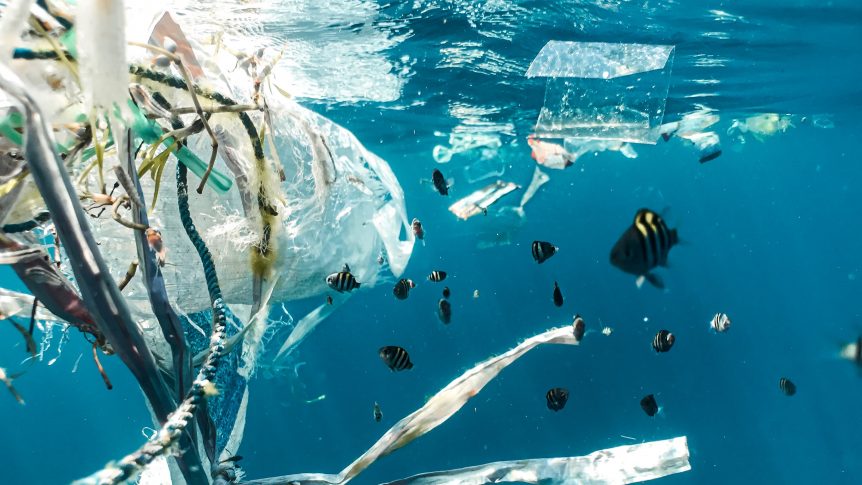 Out beyond the California shoreline, beyond the breaking waves and fickle tides lies the endless blue expanse of the Pacific Ocean. A place so incomprehensibly expansive and unknowable that its very existence is a reminder of humanity’s smallness. An entity of nature seemingly intended to drown our hubris in water, salt, and mist.

And yet even this vast place of untold power and grandeur has now fallen prey to the unstoppable advance of the Anthropocene.

Nestled within a confluence of marine currents lurks an oceanic gyre we’ve come to know as the great pacific garbage patch, an area roughly three times the size of France containing the accumulation of decades of human wastage. This is only one of several pollutant vortices that now swirl in our oceans. While these oceanic garbage patches have had a demonstrably negative impact on the marine environment, their impacts on humans are only now becoming more clear.

“We have so much pollution in the ocean already that it’s having significant health impacts on people right now and we’re just producing more waste,” says Samantha Kruse, a graduate researcher at UC San Diego working in the Slade Lab. She is currently investigating the generation of bisphenol A (BPA) aerosols from plastic pollutants.

“I think it’s been made pretty obvious by all of these grassroots efforts to reduce plastic waste and things like that, that that is not working.”

A majority of the ocean’s plastic waste is actually made up of microplastics, minute fragments generated as larger plastic pollutants break down over time. At the microscopic level, all plastics are composed of a scaffolding-like lattice of polymers interspersed with chemical compounds designed to lend the material certain qualities.

According to Kruse, it is the huge increase in surface area that occurs as a result of microplastic formation that allows these chemicals to leach out of this polymer frame and into the water at a much higher rate.

BPA is one such compound.

Used as a plastic hardener, BPA has been associated with an array of health concerns including type 2 diabetes, obesity, and reproductive problems as well as acting as a cancer-causing carcinogen. Though there’s been an increasing effort to regulate its use in food products, it continues to be used in a variety of materials, and it has already become a ubiquitous component of the global oceans with traces being found in places as remote as the arctic circle.

Even more alarmingly, it’s now being detected in humans with one study finding that 95% of American adults have detectable levels of BPA in their urine. Even as we come to better understand the implications of our BPA-filled seas we’ve barely scratched the surface as to what happens when and if this same compound enters our atmosphere.

As Kruse explains, many plastic additives, including BPA, tend to be hydrophobic and float at the surface within what’s known as the “sea-surface microlayer”, a microscopic film of hydrophobic molecules that covers the ocean’s surface. As the sea churns and waves break, popping air bubbles can propel particles of substances like BPA into the atmosphere.

It is this aerosol phase that currently drives Kruse’s research as so little is known about aerosolized BPA and its potential effects on humans. Her work seeks to paint a clearer picture of BPA’s role in the atmosphere, from its concentrations in coastal areas, how it transforms when exposed to air and light, and its potential implications for public health.

While much remains unknown, by working to better understand how BPA and other pollutants enter and exist within the atmosphere we can advocate for more comprehensive solutions. Solutions that stem the flow of pollutants into the ocean while also striving to sequester the waste that’s already there.

For Kruse, the tangible impact of her work is what keeps her motivated and she hopes that her research will go beyond the laboratory to inform policy. She is especially keen that her efforts encourage the public to hold powerful people and corporations accountable for their role in pollution, thereby shifting more of the impetus for action onto these entities.

“It’s kind of a snowball, if nobody is looking into the impacts of BPA… on public health then there is no evidence for something to change when lawmakers go to make policy.”

More broadly, she hopes that “all of the work going into anthropogenic influences on the environment are hopefully creating this breadth of examples of why we need to start fixing this problem”. Indeed as we continue to hurtle into the Anthropocene, work like Kruse’s will become only more important as we attempt to paint a picture of the adverse effects we are having on the world around us and strive to combat them.