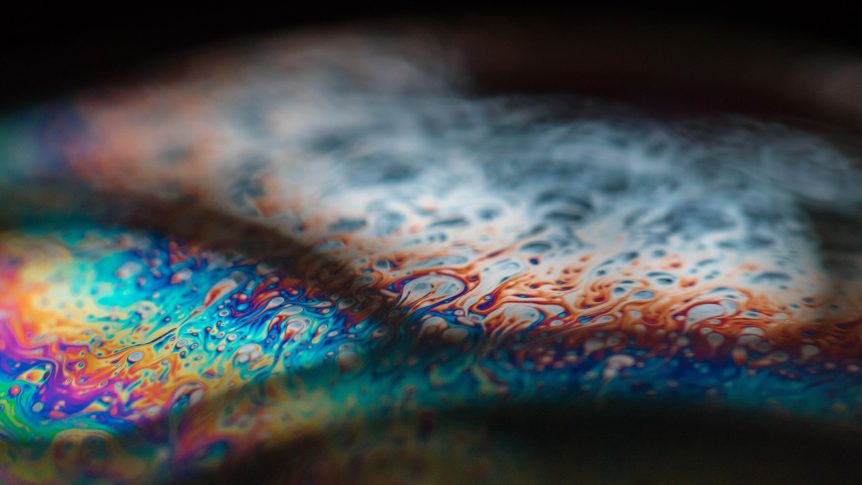 Between water and air, where the fluid abyss meets the endless aether, there lies an unseen veil. A lacy shroud binding sea to sky; a microcosm where wind and wave play hand in hand. Ephemeral, may it be,  this hazy border is a shaper of storms and solar shields.

The story of this illusory interface starts in the depths of our oceans, a blue expanse teeming with microscopic life, from bacteria to algae to viruses. Throughout their lives these microbiota drift through the seas, feeding, photosynthesizing, and churning out proteins. And then they die, as all things do, and disintegrate till there’s nothing left but the lipids, proteins, and carbohydrates that composed them; as well as you, me, and every other thing that’s ever lived.

As these cellular components break down, they begin to stratify, as hydrophilic bits dissolve and hydrophobic bits are driven to the surface. These water-fearing molecules are what make up the sea surface micro-layer, a film of detrital organic matter, only microns thick, that covers most of the surface of the global ocean like an invisible oil spill.

It is this hidden layer that fascinates Abigail Dommer, a graduate researcher at the Amaro Lab at UC San Diego.

“You’re always getting this flux of phytoplankton blooms and then blooms of bacteria and then blooms of viruses and all of these things are interacting with each other, they’re breaking down the cellular bits and recycling them” she explains. The resulting interface is a powerful modulator, controlling oceanic evaporation and condensation across the phase-state border.

Yet this division is by no means rigid and the bursting bubbles produced by crashing waves and churning tides fling these detrita into the air, aerosolizing them.

And so this assemblage of organic material is where the ocean and atmosphere diffuse into one another as tiny molecular interlopers transgress the boundary between liquid and gas.

Once in the atmosphere, these particles rearrange and take on new lives, interacting with light, ozone, pollutants, water, and other particles. The composition of the microlayer thus determines what comes out of our oceans and so influences everything that happens in our atmosphere.

Dommer’s work endeavors to decipher this interface, using computational methods to interrogate the structure and properties of the microlayer and how its different components interact with each other. This is no small feat and involves incredibly intricate simulations that model aerosol particles atom by atom. These multimillion atom models are so complex that even most supercomputers struggle with the task and special, ultra-powerful machines must be called in.

In analyzing the organization of particles at the sea surface, Dommer seeks to understand how the interface works at the molecular level which helps us explain ocean-atmosphere transfer down the line. This work is hugely important in understanding Earth’s climate because even though this layer often goes unseen, it has very tangible impacts.

But by examining the particles that constitute the microlayer, perhaps Dommer can solve at least part of the puzzle, giving us a better picture of the hidden molecules that shape the world around us.

Upon ejection into the atmosphere, some aerosols will begin to directly affect our climate, reacting with other gasses or absorbing, scattering, or reflecting sunlight. Other aerosols are far more subtle, cocooning themselves in water droplets that together form vast clouds. Both these direct and indirect mechanisms tinker with the Earth’s radiative budget, though the true extent of its effects is yet unknown.

In the years to come, these same methods may well help us as we race to combat rising sea levels and fires that rage in the wake of worsening droughts. Though climate change shows no sign of slowing perhaps we may yet find hope in the interface, in this ossuary to the microfauna that sustain our seas.

Already the modeling techniques developed by Dommer and CAICE have allowed them to tackle public health challenges as they applied the technology they use to simulate sea spray particles to develop the world’s first all-atom model of the coronavirus.