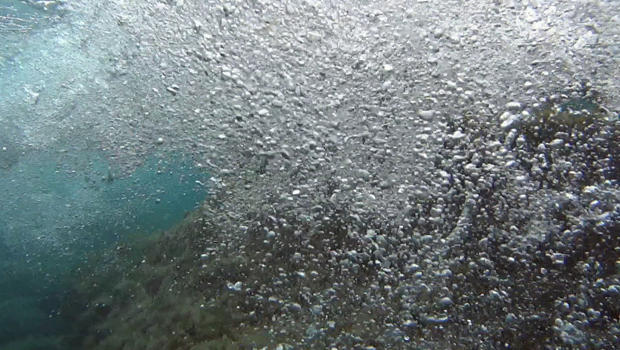 This letter by Richard Cochran, Thilina Jayarathne, Elizabeth Stone, and Vicki H. Grassian, researchers from CAICE at the University of Iowa and the University of California, San Diego highlights a study that for the first time tests the quantitative relationship between predicted thermodynamic behavior of molecules at the air-water interface and the composition of aerosol particles generated during bubble bursting. Applying fundamental principles of surface adsorption to measured compositions of aerosols generated from simple solutions in a controlled environment, we provide a bottom-up approach in further elucidating the major factors controlling the chemical composition and molecular makeup of aerosol particles. In particular, we examine the selective transfer of a series of organic compounds that differ in their solubility and surface activity across the water-air interface into the aerosol phase. Aerosols produced from complex solutions containing salts and a series of carboxlyates and dicarboxylates generated using a bubble bursting process. The surface activity of these molecules dominate the transport with enrichment factors approaching two orders of magnitude for some of these molecules. In addition, calcium was selectively enriched with respect to other inorganic cations including sodium, potassium and magnesium, suggesting the selective interaction of carboxylates with calcium. Molecular based studies using SFG support this interaction as dominating which is the cause of the selectivity of this ion across the interface.